No Man’s Sky landed on PlayStation 4 this week, and it wasn’t perfect. Cue a rash of backlash on Twitter, a few dozen angry Reddit threads and a handful of YouTube videos calling creator Sean Murray a liar and a fraud. Ah, the internet. Let’s break down a few of the high-profile glitches that people have found so far:

Those who pre-ordered the game receive a few perks, one of which is a ship that has a hyperdrive pre-installed, negating the need to find a hyperdrive blueprint like the rest of the plebeian galaxy. These cool cosmonauts then rush across the universe and eventually find a new ship to buy — but new ships don’t come with hyperdrives pre-installed. And without the hyperdrive blueprint, these players are out of luck in building a new one. This isn’t a bug, per se, but it is a major problem and a pretty large oversight from the developers at Hello Games.

There are a few workarounds for this issue until Hello can roll out a fix. If you’re a pre-order superstar, don’t claim your bonus ship until after you’ve finished the hyperdrive tutorial and acquired the blueprint. If it’s too late for that, make sure to transfer your hyperdrive from your current ship to any new ships that you purchase by manually storing it in your exosuit. 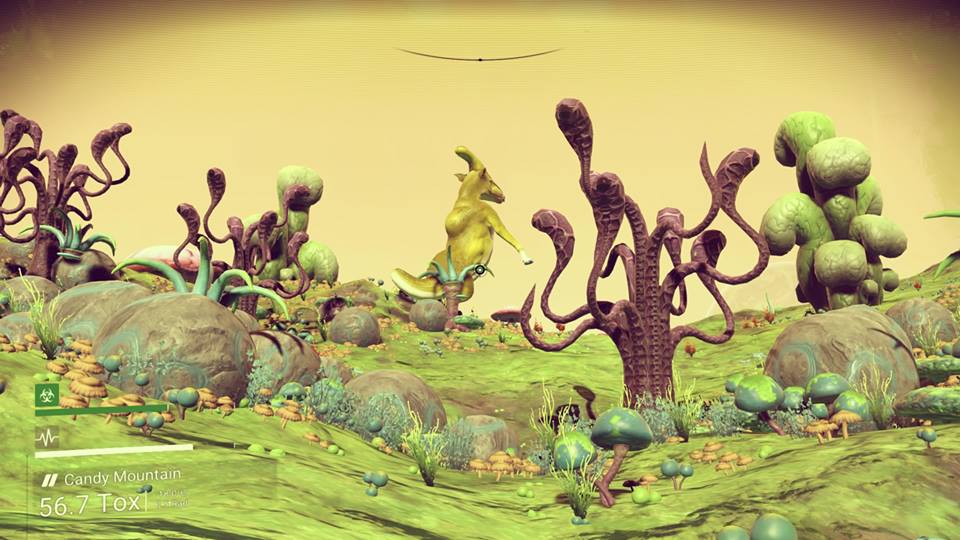 The second big issue feels like something we’d find in the Destiny forums: a resource exploit. Atlas Stones are among the most valuable items in the game, since players need 10 of them to reach the center of the galaxy and experience the closest thing the game has to an “ending.” They’re tough to craft, but one glitch outlined by Eurogamer allows players to double their inventories, Atlas Stones and all, simply by reloading a previous save. Once you die in your ship, the game allows you to collect all previous inventory from your grave marker. But reload a previous save and you’ll have that inventory plus the ability to reclaim the same items from your point of death. If you have an Atlas Stone or another valuable item in your bag, that number is suddenly doubled.

This is a simple glitch to avoid. If you don’t want to cheat, don’t cheat.

And then there’s a question of the game’s “multiplayer” elements. Two players discovered they were near each other (an unexpected feat in a universe of 18 quintillion planets) and staged a meet-up, but their paths never crossed. They streamed the entire thing, and though they encountered the same space stations and landmarks on the same planet, they never saw each other. Even stranger, one player saw a daytime landscape and the other saw night.

Hello Games hasn’t explained why these players didn’t see each other. Murray has said that players would be able to cross paths, theoretically, but that it would be highly unlikely for one player to see another in such a vast game universe. On Twitter yesterday, Murray wrote, “Two players finding each other on a stream in the first day — that has blown my mind,” and, “We want people to be aware they are in a shared universe. We added online features and some Easter Eggs to create cool moments.”

It’s unclear why these two players couldn’t actually find each other during this particular livestream. The players may have been on the same planet, but perhaps they weren’t on the same server (also known as: a cooler version of The Lake House).

These are the biggest issues facing No Man’s Sky in its first week on the PS4. For a game as vast as the universe itself and filled with all manner of neon-stained, Frankenstein planets, creatures and plants, this isn’t a bad starting point. As we’ve discussed at length, the internet has changed how video games exist in the public eye. Players expect games, even boxed console titles, to be updated, patched and improved over their lifetimes. No Man’s Sky is no different — in fact, it’s remarkable.

No Man’s Sky is a massive, unprecedented game created by a small team of developers, and it’s been sold to the public as a AAA experience. This doesn’t excuse any issues with the game, but it does explain them. No game should launch as a completely busted, unplayable experience, but sometimes this happens — and these titles deserve to be called out, especially if they cost $60 and come from AAA studios with budgets of millions.

Despite the marketing hype, No Man’s Sky is not a AAA game. And, more important, it’s not busted. The pre-order ship problem is its largest issue, and hopefully Hello Games figures out a fix soon. However, by and large, the game works. Not only does it work, but it’s gorgeous, technically astounding, innovative and engaging. And it’s only going to get better.