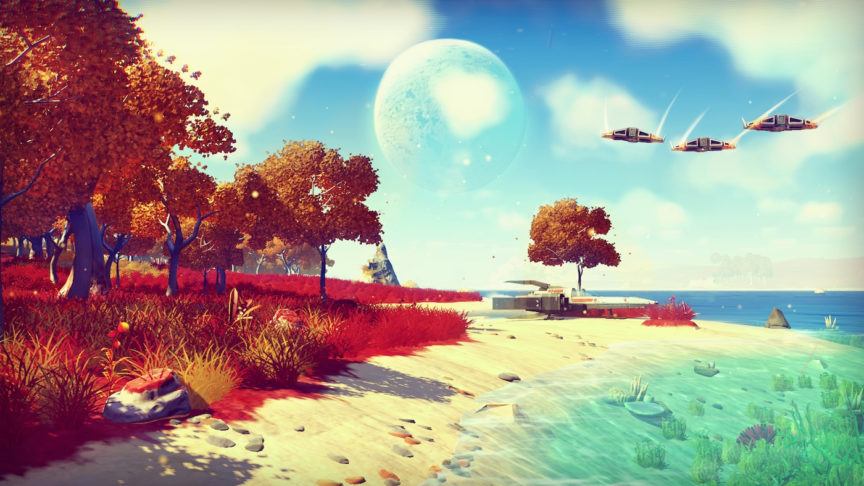 Many gamers are all too familiar with day one patches that fix bugs or add features that didn’t quite make it in time for certification or shipping. However, the first-day No Man’s Sky patch will be… more substantial. Hello Games has revealed that the 1.03 update arriving on NMS‘ August 9th launch will make fundamental changes to how the game plays. Most notably, there are now three “paths” to follow in the game — choices you make early on will determine what you see later. There’s also a deeper trading system, new combat mechanics (such as a revamped on-the-ground aiming method and critical hit systems in space fights) and even new universe and planet generation criteria. If you’re one of the few to have scored a copy pre-launch, you may be in for a shock.

Notably, the upgrade also makes it easier to discover other players. You can scan other star systems players have discovered on the galactic map, increasing the chances that you’ll run into someone. Many have argued that NMS is really a single-player game given the sheer unlikelihood of two people finding the same celestial bodies (there are 18.4 quintillion unique planets), but those odds just went up.

This is merely the “first of many” free updates to the space exploration title, Hello Games adds. The next upgrade will let you build bases, own “giant space freighters” and marvel at graphical upgrades like new cloud rendering and temporal anti-aliasing. In other words, the developers see the title as a constantly evolving project. You might get a very different experience if you hop in a few months later, let alone over the long term.