Today we’re cracking open the door to the League client update alpha and letting in the first few testers. This is just the beginning, but there’s more to come—even if you haven’t yet received your alpha invite, you’ll want to read on to learn about our plans for future releases, as well as details on how we’ll handle and respond to tester feedback. Just a heads up: alpha testers will be flying in a plane that’s still being put together. Expect turbulence (aka bugs).

STILL WAITING ON YOUR INVITE?

If you don’t have access yet, you’re in good company. As mentioned previously, not everyone who applies to the alpha is guaranteed a spot. We’re starting out with just a few folks at first, but we’ll scale up as quickly as we can while keeping things stable. Because the initial alpha release isn’t super optimized just yet, we’re excluding players with low-spec machines for now (we just don’t want those people to have a bad time). Worry not: when this thing replaces the legacy client it will work on any computer that can currently run League.

ALREADY GOT AN INVITE?

If you signed up for the alpha and have been approved, you should have already received an email as well as a notification in the legacy client. You can also check your account page where you previously opted-in to see your status. If you’re approved, download and log into the alpha client to start giving feedback!

HOW TO STAY IN THE LOOP

As releases hit the PBE, we’ll share devblogs that focus on the latest release and give context on the type of feedback we’re looking for—like this one about the first set of alpha features. When the updates hit the alpha, we’ll ask you to focus your feedback on the part of the client we’re currently working on (aka the current focus area), and roughly every two weeks we’ll publish changelogs that cover detailed updates. Just like patch notes!

As we prepare to move on to subsequent releases, we’ll put out wrap-up articles to highlight the things we’re learning and changing based on your feedback. Rinse, dry, repeat. The feedback and changes won’t ever stop throughout this process, but we’ll be asking you to move your feedback focus whenever we put out the next release.

All the blogs and changelogs that we publish will be available for everyone to read on the alpha website, even if you’re not yet in the alpha, and we’ll be engaging with people regularly on the alpha boards.

HOW TO GIVE FEEDBACK

The first alpha release is limited to the Summoner’s Rift and ARAM queues. We want your feedback on these, and we’re providing quite a few different ways for you to get it to us from the alpha client home screen. Alpha testers will be greeted by this screen each time they log in, and it’s got all the tools you need to give feedback and get information from us about the latest changes. Here’s what it looks like: 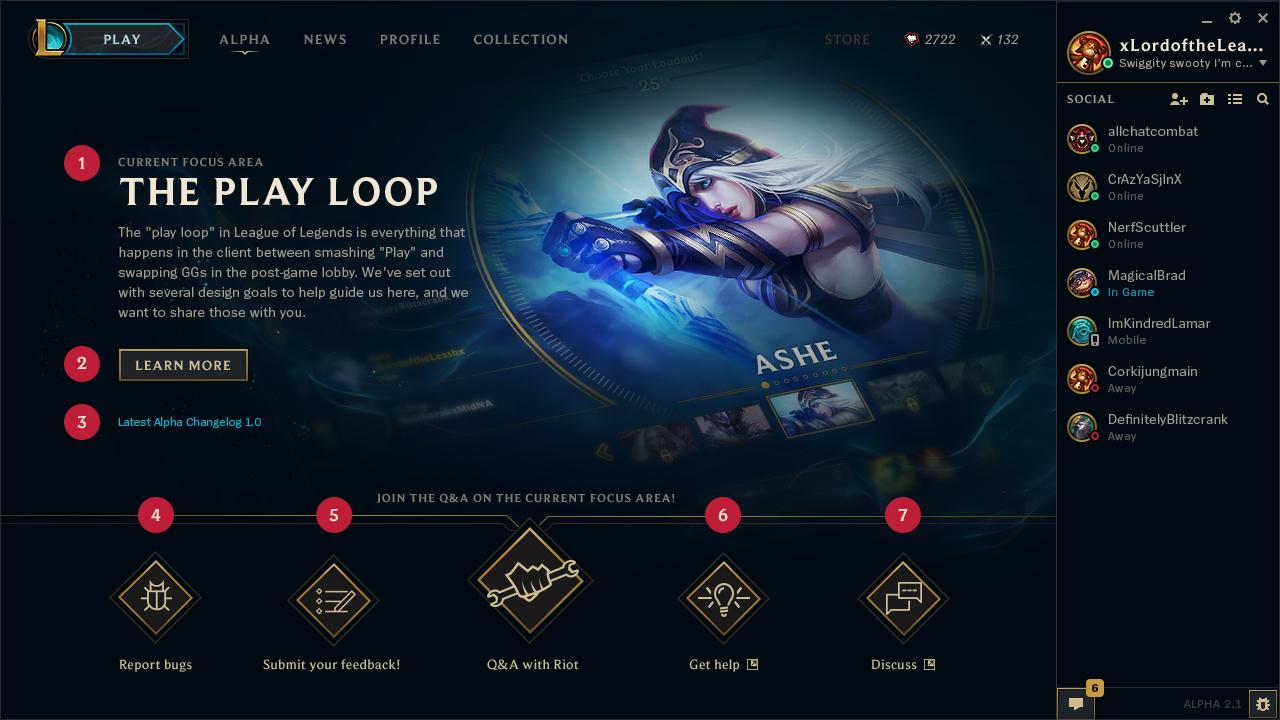 In each release, we’ll ask you to focus your attention and feedback to a particular area of the client: the current focus area. This is where we’re focusing our development resources, and it’s where we most need your assistance.

Each release will be accompanied by a comprehensive dev blog from Rioters working on the League client update. We’ll explain and explore the reasoning behind certain decisions before kicking it back to you and your thoughts on the direction we’re heading.

The changelog is your definitive source for understanding alpha updates—the alpha’s very own patch notes. It’s where we’ll display the corpses of bugs we’ve conquered in combat and the place where we’ll regularly highlight the things we’re learning and changing based on your feedback. New changelogs will post every two weeks or so.

This is the best tool for reporting specific, reproducible bugs you’ve encountered in the client. Stuff like “this button makes my client crash” or “every time I pick Teemo in champ select his laugh starts to loop endlessly” (that one would be pretty bad). Those who wield this tool well will save us much pain as we fight towards the beta.

This is your main tool when reporting generalized feedback on the alpha. It’s stuff like “I’m confused about how to get into a game” or “this font over here is super blurry and I think it might be Comic Sans.” We’ll also occasionally prompt you with surveys when we’re looking to get your thoughts on something specific.

We’ll update this article with information on known issues and self-help options that you can try out if you’re having trouble.

The boards are the best place to discuss the alpha with Rioters and other players, but they won’t be our main source for feedback resolution. Look to the other tools (especially the Submit Feedback button) for that. The boards are open to everyone, not just alpha participants.