The Scream Heard Round The Wasteland

You’re making your way through a rundown hospital on a moonlit night. The desperation for supplies drove you into such a horrible place. As you round a corner you notice a figure standing at the end of the hallway. It doesn’t look like the other zombies you encountered before. As it turns its head you notice it’s bound in a straitjacket and is missing its lower jaw. It can’t be too much of a threat right? Wrong. The strange zombie throws its head back and emits a blood chilling scream. From all corners of the hospital a new sound emerges, the shuffling of hundreds of feet… every zombie is now headed straight for you.

The new screamer zombie is being created with some new techniques in mind. H1Z1 Game developers Developers Matt Case and David Carter are here to give you a look behind the scenes at what it took to bring this unique zombie to life.

So, for the visual look on this thing, Salim Grant (Lead Designer) had requested that it be something with very different silhouette and feel than the other zombies in game. It also needed to be something that appeared to be bound up, with no threat of biting a player, but would only scream and signal other zombies.

We had one of our talented interns, Cherylynn Lima, working on the base design. While tossing some ideas around (influenced by the addition of the hospital to the game) we thought a zombified asylum patient that would broadcast some very creepy imagery and feelings. She found some old, black & white, disturbing images from an insane asylum. (I think we warped both our young interns with the research they had to do online for this game). 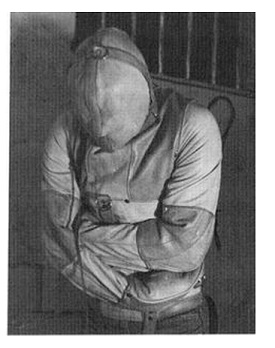 We knew we wanted to use a straitjacket to bind the character in to change its locomotion from other zombies. Cher found some disturbing head restraint images, and wanted to incorporate that into her design. She removed the lower jaw, so the zombie clearly can’t attack the player, but is still able to scream a haunting, wailing noise.  For extra creepiness, she left the zombie’s tongue hanging out of its gaping maw. 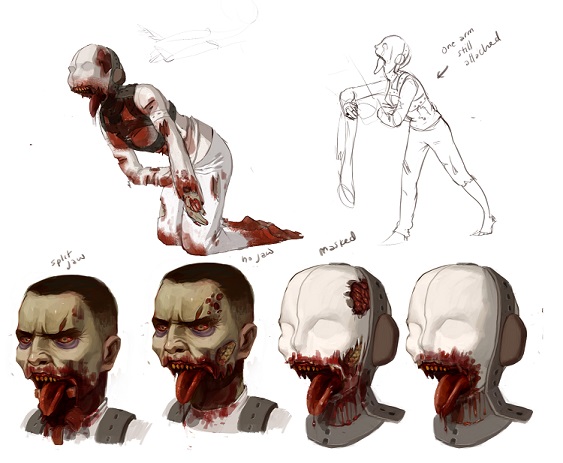 I think her change in silhouette coupled with her unique animations will allow her to stand out against the hordes of zombies in the game.

We wanted to try something a little different with the Screamer animation. There’s a method employed in some horror films to achieve a “creepy” look when a ghoul of some sort is standing around in the background or moving eerily toward the viewer. The technique involves filming an actor as they attempt to move in very slow motion, with the occasional random twitch of a body part. The film is then sped up to three or four times the original rate, so that the actor appears to be moving at a more natural speed, and a few frames are dropped here and there to gain some subtle popping. The end result is that your ghoul feels quite unnatural, even though they seem to be moving at a somewhat normal speed.

We’re attempting to do this with 3D Motion Capture technology, and applying it to the Zombie Screamer. We’re not sure how well the effect will work in a living 3D space, but we hope you enjoy the results.
Via [www.h1z1.com]